NJ Governor Chris Christie has banned Tesla’s direct sales model in NJ. Now, I understand completely why an auto manufacturer would want to use franchise dealerships rather than tying up all that capital themselves — they can focus on what they do best. I have absolutely no idea, however, how one could argue that the decision to sell directly is anti-competitive. Selling electric cars is extremely complicated — it takes way more effort and education than selling traditional vehicles. There’s plenty of evidence that salespeople at traditional dealerships are not equipped to (nor interested in) investing the extra effort it takes to pitch electric cars. (Imagine your car salesman explaining how you get a city permit to install a 220 volt charger in your garage and you start to get the idea…) Thus there’s a strong case for Tesla deciding to run the dealerships themselves. They want to make the experience smooth, slick, and iPhone like. And when someone goes into a Tesla dealership, it’s not because they were hoping the salesperson would compare the Tesla’s benefits with those of the Volt or Leaf, so where is the harm to competition?

Christie, what gives? Did NJ ban GM Saturn dealerships in the 1990s? Strange move for a Republican…

Tesla Motors TSLA -1.77% is being courted by four Southwestern states for its $5 billiongigafactory, but there’s another state that is kissing Tesla goodbye.

The New Jersey Motor Vehicle Commission voted Tuesday to ban the direct sale of vehicles in the state, becoming the third state in the nation to prevent Tesla from selling to consumers. That would force Tesla, founded by billionaire Elon Musk, to sell its cars through dealers.

Instead, Tesla will stop selling cars in New Jersey on April 1, according to Dow Jones. That means the auto company won’t have access to one of the nation’s most lucrative markets for luxury vehicles, while well-heeled New Jerseyites will have to pick up their Teslas somewhere else.

The commission’s vote followed month of discussions between Tesla and members of Gov. Chris Christie’s administration, according to a post on Tesla’s blog. The auto company said it thought that the commission and the administration were working to help it in the face of opposition from the New Jersey Coalition of Automotive Retailers.

Like many other dealer groups across the country, New Jersey dealers did not want Tesla to be able to sell cars directly to customers. On Monday, Tesla said it learned that “Governor Christie’s administration has gone back on its word to delay a proposed anti-Tesla regulation so that the matter could be handled through a fair process in the Legislature.”

Tesla said it had already been issued two licenses to open dealerships in New Jersey. “This is an issue that affects not just Tesla customers, but also New Jersey citizens at large, because Tesla would be unable to create new jobs or participate in New Jersey’s economic revival,” the Tesla blog said.

Meanwhile, a spokesman for Gov. Christie said Tesla officials would need to convince the state legislature to reverse the New Jersey ban on direct sales.

Christie spokesman Kevin Roberts said,  “Since Tesla first began operating in New Jersey one year ago, it was made clear that the company would need to engage the Legislature on a bill to establish their new direct-sales operations under New Jersey law. This administration does not find it appropriate to unilaterally change the way cars are sold in New Jersey without legislation, and Tesla has been aware of this position since the beginning.”

Tesla Motors and New Jersey are not perfect together. (Photo credit: Wikipedia)

The other two states to have banned Tesla from direct sales are Arizona and Texas. Coincidentally, both states are on Tesla’s consideration list for its massive battery factory. The other states in the running are New Mexico and Nevada.

Texas’ auto dealers have said they would still fight to keep the company from being able to sell directly to customers, even though the $5 billion plant is considered one of the biggest industrial prizes ever.

The New Jersey action comes after the Tesla Model S was named the top car for 2014 by Consumer Reports magazine.

A great New York Times article this morning (link below) details ways in which the patent system gets used as both an offensive and defensive weapon, with billions of dollars of collateral damage to start-ups, consumers (see the “patent tax”), and innovation in general. The victim in the opening Vignette (Vlingo, a voice-recognition software start-up) might have been saved by a simple change in the rules: make the losers of patent lawsuits pay the legal costs of the winner. It turns out that it’s rather easy to kill small firms (or force them to sell to you) by launching a patent lawsuit against them that bleeds them dry with legal fees. You don’t have to win — you just have to force them to fight until they no longer have any money.  Vlingo ultimately won the patent lawsuit that had been filed by a much larger rival, but had to loot its own meager coffers to pay the legal fees of doing so. Vlingo slumped home with its patent lawsuit victory and shut its doors for good. If losers of such battles paid the legal fees of winners, such fights might both be less common, and less likely to be fatal.

The article also points out that software patents have proven particularly dangerous because they are prone to protecting vague claims like “a software algorithm for calculating online prices,” thereby granting the patent holder vast tracks of technological real estate. An interesting talk by Tilo Peters at the Strategic Management Society conference yesterday points to another useful tool for rationalizing some of this misuse of the patent system: Strategic disclosure. If, for example, you decided to publish a manifesto about all of the things you might do with software in the reasonable future (remember patents have a “usefulness” condition so you’re not allowed to claim something deemed non-feasible), you might be able to essentially proclaim that technological territory as unpatentable. It wouldn’t prevent competitors from developing in those areas, but it could keep them from patenting in those areas. In essence, it transforms a space in which property rights may be allocated into one in which property rights may not. I’ve left out some details but you get the idea.

Now it occurs to me that a fair amount of strategic disclosure in the smart phone space took place in the form of Star Trek episodes. I’m going to go look for references to prior art… 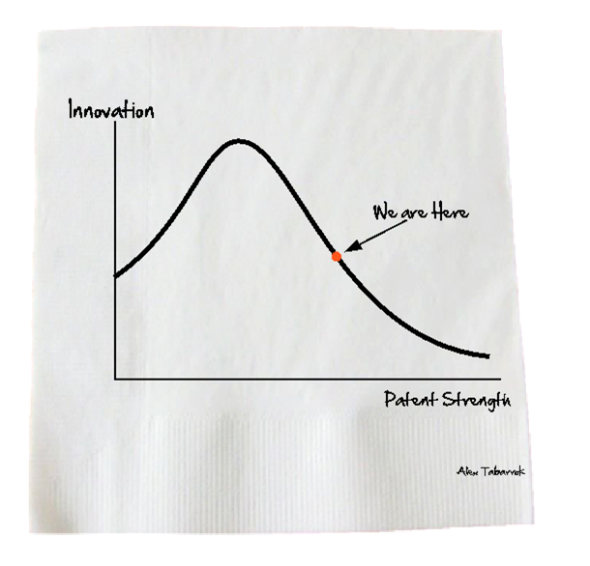 Alex Tabarrok’s pictorial commentary on patent policy, drawn on a napkin, posits that the current patent system is somewhat too strong and thereby decreases innovation (the link to his original post is below). I have to say, however, that I don’t think patent strength is the problem. The problem is that the growth in patent applications over the last two decades has vastly exceeded the growth in resources available to the patent office, resulting in 1) long delays between patent application and granting (which can render patents completely pointless in fast moving industries), and 2) inadequate ability to examine the patent applications for novelty, usefulness and non-obviousness. This lowers the value of good patents (because they aren’t granted quick enough or may be fallaciously challenged) and increases the likelihood of bad patents being granted. As a result, for many individuals and firms, the expected net gains from manipulating the patent system for the purposes of extortion (hostage taking, patent trolling) now exceeds the expected net gains from using the patent system to actually innovate.

It’s difficult to assess how patent strength affects innovation without first making sure that patents are being granted and used the way the system had originally intended.

Research by Mucking About

I am a long standing fan of the Ig Nobel awards. The Ig Nobel awards are an initiative by the magazine Air (Annals of Improbable Research) and are handed out on a yearly basis – often by real Nobel Prize winners – to people whose research “makes people laugh and then think” (although its motto used to be to “honor people whose achievements cannot or should not be reproduced” – but I guess the organisers had to first experience the “then think” bit themselves).

With a few exceptions they are handed out for real research, done by academics, and published in scientific journals. Here are some of my old time favourites:

To the best of my knowledge, there is (only) one individual who has not only won an Ig Nobel Award, but also a Nobel Prize. That person is Andre Geim. Geim – who is now at the University of Manchester – for long held the habit of dedicating a fairly substantial proportion of his time to just mucking about in his lab, trying to do “cool stuff”. In one of such sessions, together with his doctoral student Konstantin Novoselov, he used a piece of ordinary sticky tape (which allegedly they found in a bin) to peel off a very thin layer of graphite, taken from a pencil. They managed to make the layer of carbon one atom thick, inventing the material “graphene”.

In another session, together with Michael Berry from the University of Bristol, he experimented with the force of magnetism. Using a magnetized metal slab and a coil of wire in which a current is flowing as an electromagnet, they tried to make a magnetic force that exactly balanced gravity, to try and make various objects “float”. Eventually, they settled on a frog – which, like humans, mostly consists of water – and indeed managed to make it levitate.

The one project got Geim the Ig Nobel; the other one got him the Nobel Prize.

“Mucking about” was the foundation of these achievements. The vast majority of these experiments doesn’t go anywhere; some of them lead to an Ig Nobel and makes people laugh; others result in a Nobel Prize. Many of man’s great discoveries – in technology, medicine or art – have been achieved by mucking about. And many great companies were founded by mucking about, in a garage (Apple), a dorm room (Facebook), or a kitchen and a room above a bar (Xerox).

Unfortunately, in strategy research we don’t muck about much. In fact, people are actively discouraged from doing so. During pretty much any doctoral consortium, junior faculty meeting, or annual faculty review, a young academic in the field of Strategic Management is told – with ample insistence – to focus, figure out in what subfield he or she wants to be known, “who the five people are that are going to read your paper” (heard this one in a doctoral consortium myself), and “who your letter writers are going to be for tenure” (heard this one in countless meetings). The field of Strategy – or any other field within a business school for that matter – has no time and tolerance for mucking about. Disdain and a weary shaking of the head are the fates of those who try, and step off the proven path in an attempt to do something original with uncertain outcome: “he is never going to make tenure, that’s for sure”.

And perhaps that is also why we don’t have any Nobel Prizes.